This book is a love letter to the world from those who have shared their stories of love, compassion, and understanding following the death of a loved one. Their collective wisdom is life-affirming, gently comforting, and a reminder to live full‑out and love with all our hearts.

"A deeply compassionate, extraordinarily sensitive, and objectively scientific exploration of the mystery of death, this book is a wonderful gift." 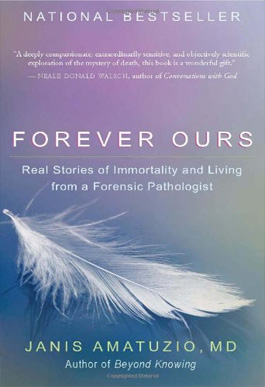 This book is a love letter to the world from those who have shared their stories of love, compassion, and understanding following the death of a loved one. Their collective wisdom is life-affirming, gently comforting, and a reminder to live full-out and love with all our hearts.

"As a Forensic Pathologist, Dr. Janis Amatuzio looks death in the eye every day, and she has come away from this confrontation with a message of promise and hope". 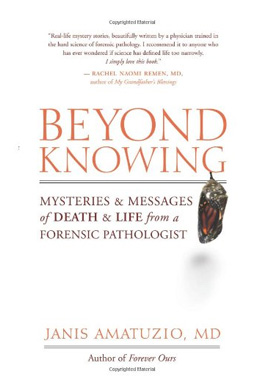 Working as a medical examiner, Dr. Janis Amatuzio has found that by listening and talking to loved ones of the deceased, she can offer them a sense of closure.

As in her first book, Forever Ours, Dr. Amatuzio presents the amazing, heartfelt accounts told to her by grieving family members, patients, doctors, nurses, clergy, and police officers. Along with these stories, she shares her own story - reflecting on the course of her career, the bonds she has formed over the years, the lessons she has learned, and her conclusion that everything truly is all right.

This powerful book honors the mystery of life and death, exploring the realms of visions, synchronicities, and communications on death's threshold. Told in the voice of a compassionate scientist who sees death every day, these stories eloquently convey the patterns of truth Dr. Amatuzio has found in what she sees and hears. Beyond Knowing explores the wisdom the living might find in these accounts and shows how that wisdom changes lives.

"Beyond Knowing is a book of real‑life mystery stories beautifully written by a physician trained in the hard science of forensic pathology. I recommend it to anyone who has ever wondered if science has defined life too narrowly and asked themselves 'What if...?' I simply love this book."

Our Luminary for this Medical Reflections issue is a locally bred and professionally trained, distinguished Forensic Pathologist. She is also a writer of some renown, a wife, a horsewoman, a loving daughter, and a continual student of the human condition.

Dr. Amatuzio combines the scientific, sometimes stark, objectivity in the field of Forensic Pathology with the more ethereal subjectivity of her ongoing exploration of the human condition, and it works! A fruitful product of that approach has been demonstrated by the many understanding contacts she had with family members of the departed. The compassion she radiates and the comfort she provides to those she serves are not unlike those practiced by her dad so many years ago. He would be proud, as are we.
MetroDoctors, March/April 2015

"Here's a puzzle for you: How did a respected pathologist, who deals with autopsies, dead bodies, and mortal remains, come to believe we're all immortal, right now? To her courage in standing up for this vision -- this truth -- of who we are, I bow deeply."

The Deadly Women Series has aired internationally on the Discovery Investigation Channel since 2006. The series is produced in Australia by Beyond International.

The company responsible for creating the Deadly Women Series, 'Beyond International' from Australia, fly's teams of researchers and photographers around the world every year to interview people and film places for the episodes.

They flew a team to Boston and Fall River, MA, to film and research the circumstances of the brutal stabbing bludgeoning deaths of Andrew and Abby Borden, in 1892. Andrew's daughter, Lizzy Bordon was tried and found innocent of the brutal deaths of her father and step-mother in their home. No one else was ever charged with their murders. As a result, speculation continues as to 'what really happened'.

This episode, which aired in 2014, celebrated the 100th episode of "The Deadly Women Series". 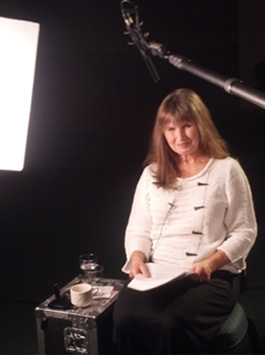